Her love of innovative programming and a diversity of choral styles and genres is evidenced in the eclecticism for which Cantate Carlisle has become known. A lifelong interest in theatre and textual interpretation draws her to music with interesting poetry and well written texts and provides the basis for thematic concerts, thoughtful program ordering, and careful interpretation of the lyrics as they relate to the music.

International travel is a passion for Ms. Parsons, who has led Cantate singers on performance tours of England and Scotland, Hungary, the Czech 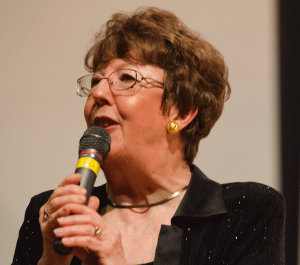 Republic and Austria, and Ottawa, Montreal, Quebec City, and the Eastern Townships of Canada. She has attended the World Symposium on Choral Music in Vancouver, Sydney, Rotterdam, Minneapolis and Copenhagen, bringing a wealth of music from around the globe to Cantate singers and audiences.

From 1977-2012, Ms. Parsons directed the choral program at Carlisle High School, where her ensembles were widely known for their high standard of excellence and challenging repertoire.